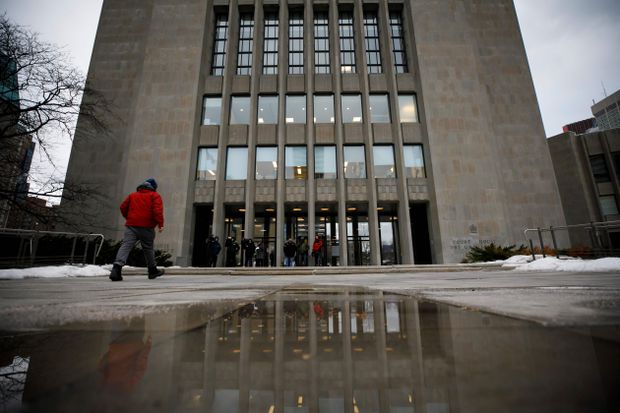 The reopening of Ontario’s courts next Monday is being challenged by prosecutors and courthouse staff, who filed a court notice saying they intend to seek a judge’s order to put a stop to it. They say the province’s plan lacks basic safety measures and would expose them and their families to the risk of “irreparable harm” from COVID-19.

Among other things, the group of 5,000 provincial and federal Crown attorneys, legal aid lawyers and courthouse staff is demanding a mandatory mask policy and a ban to entrants who are ill, or appear to be ill. The group filed its demands in the Ontario Superior Court of Justice last Thursday.

Some criminal-defence lawyers call the group’s demands hypocritical. They say that prosecutors have frequently opposed efforts to reduce the use of custody during the pandemic.

The prosecutors and court workers say in their notice filed that the legal foundation for their demands is at least threefold: the obligation any employer has to protect the health and safety of its workers; the duty government has to respect the right to personal security, under the Charter of Rights and Freedoms; and the discriminatory effect they say the reopening would have on certain people because of age, disability, family or marital status.

The provincial government “has not taken every reasonable precaution to protect the health and safety of its employees in these courthouses in the midst of the ongoing COVID-19 pandemic,” say the Ontario Crown Attorneys’ Association, the Ontario Public Service Employees Union, the Association of Law Officers of the Crown, the Association of Justice Counsel and the Society of United Professionals.

The group has not yet filed the request for the injunction itself, as the province has begun releasing new information about safety measures it is taking, said Tony Loparco, the president of the Ontario Crown Attorneys’ Association. It is doubtful at this point that the group could obtain an injunction in time for next Monday, he said, but he expects some Crowns with medical vulnerabilities won’t show up in court.

Brian Gray, a spokesman for the Ministry of the Attorney General, said it has developed a phased, gradual and responsive plan with safety measures “designed to ensure the health and safety of everyone inside a courthouse.”

The courts have been mostly closed since shortly after the pandemic began, except for urgent matters, with some hearings held by telephone or video. The first stage of the reopening will involve 149 courtrooms in 44 buildings across the province, the group said in its court filing. Some criminal trials will be held, according to the Superior Court website; jury trials will not happen until at least September. Regional judges will direct which civil and family matters may be heard in person.

Michael Spratt, a criminal-defence lawyer based in Ottawa, said no one should have to return to an unsafe workplace, and courthouses could be made safer. “But Crown attorneys have consistently told court, when opposing bail or seeking custodial sentences, that jails are safe – despite outdated HVAC systems, the inability to physically distance, and most inmates being denied masks. This level of rank hypocrisy is unbecoming and deeply disappointing,” he said in an interview.

Currently, there is one positive COVID-19 case in Ontario’s jails, and there have been 125 resolved cases, a corrections spokesman said Monday.

Mr. Loparco replied that the jails are a separate issue. “They can say what they want. I totally disagree.”

The prosecutors and other court workers accuse the Ministry of the Attorney General of having used risk assessors with no background in how the courts function or in how the virus spreads – for instance, they say, a forestry specialist was used in North Bay. They say the government excluded their associations from discussions on their safety plan.

They demand a mandatory mask policy in court buildings for all visitors at all times, except when speaking in court. Those who work in courthouses would need to wear masks when they are unable to maintain a physical distance of six feet from others.

They also want people currently infected with COVID-19 kept out of court buildings. “It is our understanding that no person will be denied entry even if they have contracted the virus and admit to it,” the court filing says.

On February 16, 2021, The Government Announced That Residential Eviction Enforcement Will Resume In 27 Public Health Unit Regions Below

Everyone has heard of the countless bad tenant stories: squatters, garbage left behind,...