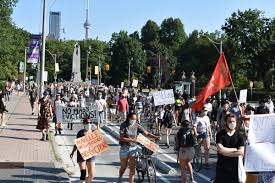 Hundreds of people gathered at the Ontario legislature on Monday to protest a new bill they say would make it easier for landlords to evict tenants when COVID-19 restrictions ease. Protesters held placards, listened to speakers and chanted slogans at Queen’s Park before they marched north and west to the condo of Toronto Mayor John Tory near Bloor Street West and Bedford Road.

Once there, demonstrators pulled out a notice that indicated Tory could be evicted from his home under the new legislation. The protesters clashed with Toronto police at the entrance to the building. Const. Alex Li, spokesperson for the Toronto Police Service, said there were no arrests and no injuries to officers or demonstrators. “They were pushing our officers. They tried to gain access into the building. They didn’t succeed,” Li told CBC Toronto.

Li also initially said that no pepper spray was deployed by officers at the scene. On Tuesday, however, Toronto police walked back that statement after an image surfaced online of an officer clearly spraying the chemical irritant toward demonstrators.

The picture was posted by at least one group, Standing Up for Racial Justice Toronto, on Twitter.  Toronto police’s verified corporate communications account responded, saying the error was due to a “delay in communication in the midst of the evolving situation.”

“At the time the media relations officer spoke with reporters, he was not aware of pepper-spray being used. It had simply not been reported back to him yet.” Earlier in the evening at Queen’s Park, Hanna Mughal, an organizer of the protest, said the new bill would likely increase homelessness in Toronto.

“People will be losing their homes. Where will they end up? Will they be able to afford rent elsewhere? They’ll probably be moving away from their communities if they can’t afford rent. If not, they’ll end up on the street,” Mughal said. Mughal said the bill would enable landlords to evict tenants who have been unable to pay rent during the COVID-19 pandemic.

It would give landlords the power to create their own repayment plans without having to go to a hearing at the Landlord and Tenant Board, she added. The bill would also allow the Landlord and Tenant Board to issue quick eviction orders against tenants who were pressured by landlords to sign unreasonable rent repayment agreements and who cannot afford to follow through on those agreements, she said.

Carly Tisdall, a tenant, said the bill is in favour of landlords and robs her of any legal defence. She said her landlord has not taken into account any economic realities faced by his tenants.

“I am afraid they’ll evict me and I’m afraid that I will not be able to legally oppose it, that if I don’t have the money, I won’t be able to fight it at all,” Tisdall said. Advocates for tenants say Bill 184, known as the Protecting Tenants and Strengthening Community Housing Act, would provide a number of new ways for landlords to evict and collect unpaid rent from current and past tenants.

The bill would apply retroactively to March 17, when the provincial government declared a state of emergency due to the pandemic. It moved to third reading on Monday.

Bryan Doherty, a tenant, said the bill paves the way for quick evictions.

“Once that tribunal opens, once those hearings go through, we are potentially looking at hundreds, if not thousands of families that will be faced with speedy, brutal evictions,” he said.

Bill to allow landlords to bypass Landlord and Tenant Board

Under current law, all disputes over evictions and rent in arrears must be heard by the Landlord and Tenant Board, some of which result in rent repayment plans. Bill 184 would allow landlords to cut the board out of the equation and offer tenants their own repayment plan.

If a tenant refuses the landlord’s offer, they can still take their matter before the board, but some critics and legal analysts say it’s more likely that vulnerable tenants will sign onto shady repayment plans because they don’t know how to navigate the system.