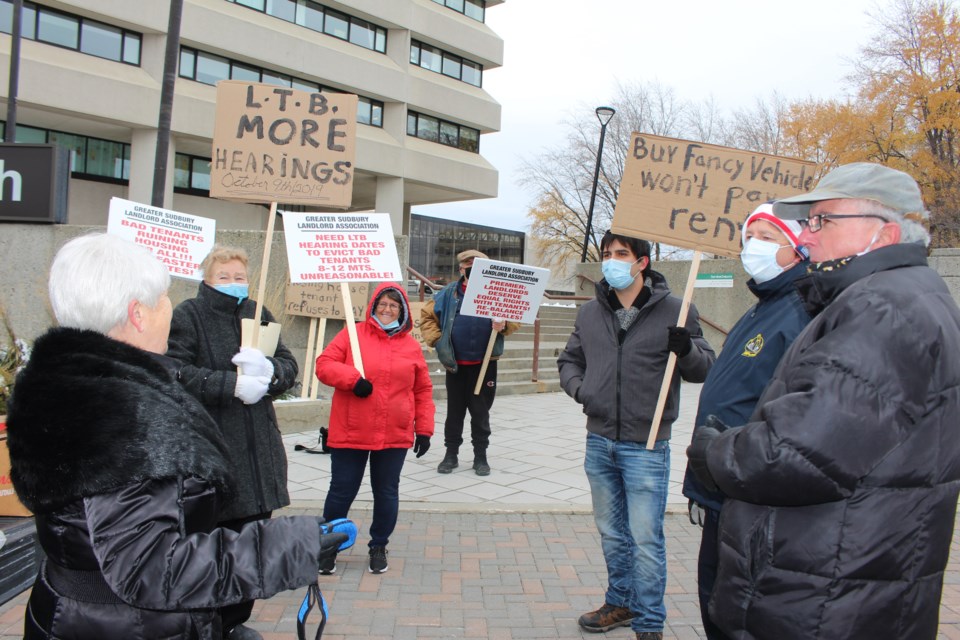 A group of frustrated Sudbury landlords took to the streets in front of Tom Davies Square on Oct. 27 to express their displeasure with the Landlord and Tenant Board (LTB). Organized by Greater Sudbury Landlord Association president Ray Goulet, the protest drew more than a dozen local landlords who say they have been struggling with problematic tenants and have seen little to no response from the LTB. “We want to bring attention to the LTB that we’re not getting enough hearings. There are so many tenants that are in arrears, six months, ten months, and we still can’t get a hearing for eviction,” said Goulet.

“Bill 184 really hasn’t done us any good because the LTB isn’t getting off their behinds to service landlords the way they should be.” Dubbed the “eviction bill” by tenants, Bill 184 is a collection of amendments to the Residential Tenancies Act that were put in place to allow corporate landlords to more easily evict problematic tenants. The landlords gathered on Tuesday, however, are not corporate landlords, but residential landlords who are renting out their own properties.

“We have a landlord here whose tenant hasn’t paid rent since January and they’re not able to get them out,” said Goulet. “He finally got a hearing with the LTB for Nov. 5, but we really had to shake the tree and get their attention … landlords are losing their properties. Tenants aren’t paying and are using COVID as an excuse, and that’s not right.”Merle Smith has been renting out a four-bedroom home in Minnow Lake to a couple for more than three years but said he hasn’t seen a rent payment since January of this year.

“They haven’t paid rent since January. There’s probably $35,000 damage done to the inside of the house, there are smashed walls, broken windows. I just replastered the whole house before they moved in. It was like a brand new house, for $1,400 a month, that’s a hell of a deal,” said Smith. “I’m out almost $15,000 from non-payments. No matter how many emails I send, they never answer me. They’ve changed the locks on the door, so I don’t even have access to the home.”

Smith’s tenants have had their share of legal issues and the house was raided by police in May and the tenants were hit with drug-related charges, he said. The home has become “a black mark” in the neighbourhood, according to Smith, who says that neighbours don’t want to go near the house. “One of the neighbours wanted me to go and talk to them because they’re scared of them,” said Smith. “If you see some of the people that showed up at that house, you couldn’t imagine.”

Smith has been pushing for months to get a hearing with the LTB in order to have the tenants evicted, but other landlords who gathered Tuesday are still in limbo with no end in sight to resolve their issues with troublesome tenants. Barbara Carpenter has her own rental property in Minnow Lake, and though her tenant hasn’t been skipping rent payments, there has been significant damage done to the property. “I started down this process to get a hearing back in September of 2019. It’s been over a year and there still hasn’t been anything done,” said Carpenter. “My tenant is deaf and at the original hearing there wasn’t an interpreter there for him so it was cancelled and now I’m just left waiting.”

Carpenter says that the property has sustained as much as $16,000 in damages with staircases being broken, holes put in walls and railings being pulled out. “I’m trying to get in front of the LTB, but we don’t get anywhere. This isn’t right. I don’t want to have to be talking to the media, I want a hearing, I want someone to listen,” said Carpenter. “I’ve written letters and still I have no hearing date. I don’t know what else to do.” Smith feels that there could be thousands of landlords in Sudbury who are having similar struggles with problem tenants and no way of rectifying their situations, and it’s causing some to shy away from even entering the rental market in the first place.

“For residential landlords, we’re renting for cheaper than a lot of these bigger high-rise buildings and corporate properties,” said Smith. “But what’s happening in the residential landlords are getting so scared that they’re not renting anymore. What’s going to happen to these people that are looking for affordable housing?” In the case of Smith and many other residential landlords, their rental properties are their primary source of income and are finding themselves in financial hardships due to tenants who are refusing to pay rent.

“I have to come up with $980 a month to pay the mortgage on that house, I’m absolutely reliant on that rent money,” said Smith. “The taxes are $320 a month, the insurance is $228 a month, plus the mortgage payment, so what does that leave me with? I did everything I could to help (my tenants) and this is what I get in return?” Smith is hopeful for a speedy resolution at his LTB hearing next week.

“All I want is for them to say ‘get the hell out of my house.’ Personally, I don’t think they have a chance to defend themselves. They’ve got drug charges, you can’t run a drug factory in a residential area,” said Smith. “I have people telling me that I’m a mean landlord for trying to evict them, and to them, I say, ‘You come and make the mortgage and insurance payments then and let them live there as long as they want’ — why should I be forced to do it?”