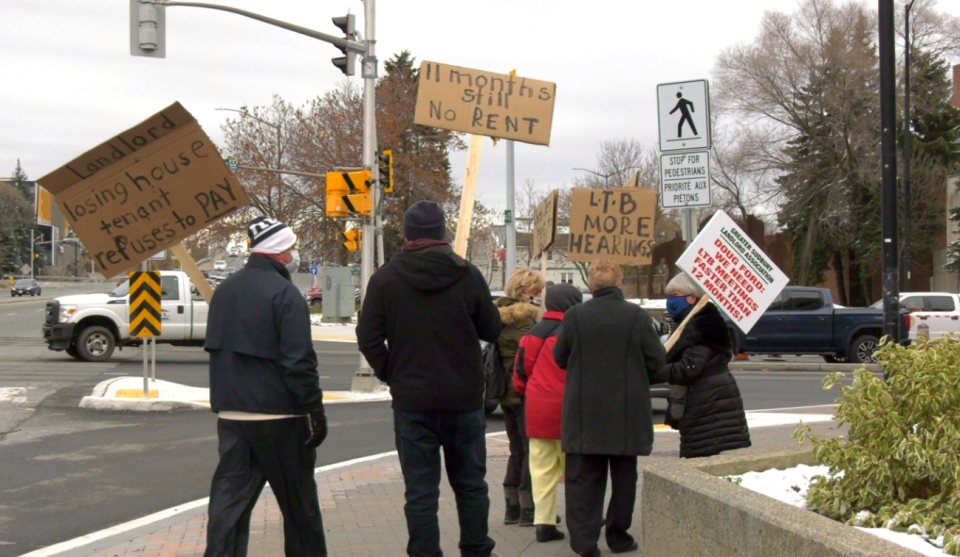 SUDBURY — The Greater Sudbury Landlord Association says it’s had enough with the delays its members are dealing with at the Landlord and Tenant Board.

Tuesday morning, they gathered with protest signs, calling on the premier to hold more hearings at the provincial building on Larch Street.

Among those in attendance was Merle Smith, whose tenants stopped paying rent on their Minnow Lake property earlier this year.

“I rented instead of selling, to give these people a hand,” Smith said. “Well the first two years, they were pretty good tenants and after that, they just want crazy … They destroyed my house, there’s probably $35,000 in damage to it. On the 26th of May, the police went in and raided it, smashed all the doors. They were selling drugs out of the house.”

Smith said the whole ordeal has taken not only a financial toll on him and his family, but it’s also taken a toll on his health.

“I have heart issues and my doctor says this was all brought on by stress,” he said. “I haven’t slept since January and I can tell you that honestly. I ended up going for two angiograms and finally on the 9th of July I had to go in for open-heart surgery. There’s not one person in the Smith family, or on my mother’s side, that ever had a heart problem.”

Smith said it’s ridiculous someone would expect to be able to live in his house and force him to have to pay all of the expenses while he is able to live rent-free.

He said the government has to change current laws are written giving more consideration to people like him who are ‘residential landlords.’ Sudbury property owners say they don’t have the same backing as a company that owns apartments and condos in the Greater Toronto Area.

Legault said the tenants she used to have were a nightmare. She said she was assaulted by one of the women who used to live in the building. More needs to be done to help local landlords, she added.

“They need to get off their butt and look at what we’re going through,” Legault said. “Landlords are going through hell and there’s nothing, nothing at all to protect us and they’re just so biased, they just keep taking for the tenants. Poor tenants, poor tenants – well, poor tenants are really causing the problems.”

Ray Goulet, of the Greater Sudbury Landlord Association, said some tenants have received support during COVID, but haven’t spent it paying their rent.

“We know of tenants that have gone out and just spent on a car, they’ve spent on something, whatever else, and not paid their rent,” said Goulet.

He said many landlords are in trouble right now because of Landlord-Tenant Board rules.

“For those tenants that are in arrears, upwards of six months, 10 months, over a year – it’s very clear, we need an eviction going now because what’s happening – the landlords are losing their houses,” Goulet said.

Kenneth Hale is a legal director for the Advocacy Centre for Tenants Ontario. He said tenants, like everyone else, have had a tough time dealing with COVID-19. They’re calling on the province to enact a moratorium on evictions throughout what’s left the pandemic.

He’s hopeful that could give the Landlord and Tenant Board the time it needs to build capacity, hire adjudicators and eliminate the current delays.

The majority pay their rent

Hale doesn’t put much stock into claims the current process favours the tenant.

“The vast majority of tenants throughout the existence of the Landlord and Tenant Board have paid their rent, we’re facing unprecedented, difficult times now and it’s hard to see why this one group should have some sort of priority,” said Hale.

The Ontario Ombudsman’s Office launched an investigation into the mounting reports of delays it had been receiving earlier this year. It’s unclear how long the investigation might take since they are still sifting through evidence.

“Of the more than 200 complaints the Ombudsman received about the LTB in fiscal 2018-2019, about 80 were specifically for delays,” the news release said.

They add they are very cognizant of the fact these delays could have a significant human impact.

The Landlord’s Right of Entry into a Rental Unit